3 must-have multi-functional appliances to save time, space and money. 2-in-1 appliances were frowned upon in the past. A good example was the older washer-dryer, where neither the washer or the dryer worked as effectively as a stand-alone appliance. Now, however, multi-functional appliances are fast becoming the hero products. They are an excellent choice for those looking to save space and are often more convenient and can speed up your cooking time too. Here are three appliances that are worth considering. All in one tap

One of my favourite multi-functional appliances is the hot water tap. Hot water taps do so much more than provide boiling water. Most brands offer combined models that work as the primary sink tap while delivering boiling and filtered drinking water. Quooker also provides an add-on called CUBE that can be used with any of their taps to provide filtered sparkling and chilled drinking water. You’ll lose a little space under your sink but save lots of space in your fridge and no longer need to use plastic bottles. The CUBE unit can be installed next to the Quooker tank under your sink. It comes with two filters and a CO2 cylinder that gives you 60 litres of sparkling water.

Not only will a boiling water tap give you instant boiling water and save you space in your kitchen, but it will also save on energy costs. Quooker claims that the cost of using its hot tap is one cent per litre delivered, or approximately three cents a day. The cost of boiling a full kettle (which typically holds 1.5 litres) is around 2.5cent per boil. Having hot water on demand will also mean you will waste less water. How many times do you empty the kettle before you boil it?

A small compact appliance like a combi-oven steamer or a combi-oven microwave are a great addition to any kitchen. Combined with a single oven, these appliances will take up only a bit more space than the traditional double oven. But they will give you much more functionality and flexibility when it comes to cooking.

Many modern combi -ovens have pre-programmed settings that work out the perfect length of time to cook whatever you are planning. You select the setting for what you want to cook and the oven takes care of the rest. The hero product amongst multi-functional appliances has to be the vented hob. Vented hobs come with built-in downdraught extractors. They are available in both induction and gas hobs. Vented hobs do away with the need for an overhead extractor fan and are incredibly effective as extractors because the extractor is right beside the source of steam.

Choosing a vented hob will open up more options regarding your kitchen layout and design. Having the hob on the island is becoming more and more popular. Choosing a hob with an integrated extractor eliminates the need for an extractor hood in the ceiling. The induction versions are sleek and streamlined in design, making them ideal for locating on an island unit as you hardly notice them.

Traditional extractor hoods tend to collect dust and grease, so they are another thing in the kitchen that you’ll need to clean. With a vented induction hob, cleaning is almost effortless. Cost is often a concern when choosing a vented hob over a standard hob and extractor. But a 93cm hob could cost €1200 and a hod a hob might be €800 – €900, bringing the 2 in line with the cost of a vented hob.

Do you know someone who is planning a home improvement? Why not share the link to this post with a friend who you think might enjoy our content? Or share the post on your favourite social channel with the hashtag #optimisehome. We count on you to spread the word about the blog, so thank you for helping us get the blog in front of new readers. 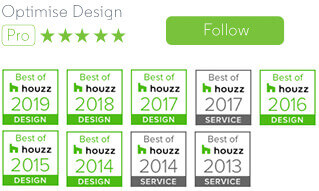